If you’re a fan of the NFL Red Zone Channel, you might have heard host Scott Hanson recapping multiple miraculous wins (and horrendous losses) early this season, where teams prevailed despite their opponent’s 98%+ win probability (“according to NFL Next-Gen Stats,” as Hanson attributes). If you’re a believer in grit, determination and "giving 110%," you might think these are terrific efforts by teams that refuse to die. If you’re a nerdy statistician, you’d think instead, the NFL’s win probability model must be way off!

In the 10 Super Bowls contested in the 2010s, 3 teams prevailed after their win probability fell below 4% (New England vs Seattle1, New England vs Atlanta, Kansas City vs San Francisco), and another won after its WP had fallen to 20% (New York Giants vs New England). Just last year, champions Kansas City trailed significantly in all 3 of its playoff games, with its opponent’s win probabilities peaking at 93.9% (Houston, Divisional Round), 61.4% (Tennessee, AFC Championship) and 96.1% (San Francisco, Super Bowl LIV). 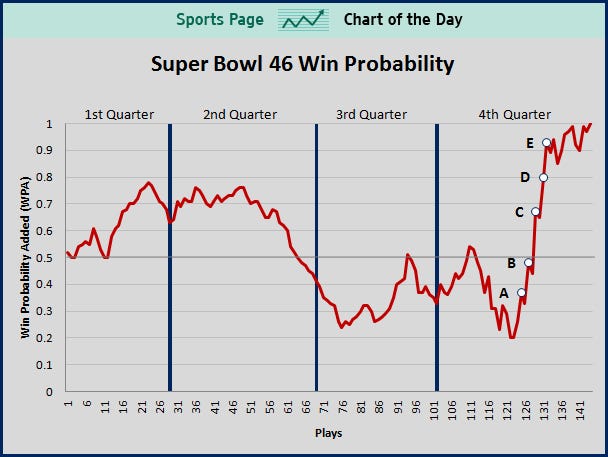 Given so many “unlikely” comebacks, it certainly seems that the actual probability of winning is quite a bit lower than what gets spit out by these win probability formulas, especially when elite teams are involved. Why is this? Why are the models so overly confident? Can their accuracy be improved?

Let’s start out by stating that this isn’t the first time the accuracy or usefulness of win probability model have been questioned. The best analysis I’ve seen was written by Michael Lopez, where he compares 6 distinct models: Pro Football Reference, ESPN2, PhD Football, nflscrapR, Lock and Nettleton, and Gambletron 2000. We can categorize these models, plus another half-dozen I’m aware of, by level of transparency:

Are the models actually flawed?

An important concept in statistics is understanding that “anecdotes aren’t data.” That is, just because we can recall a handful of high-profile games where the models were overconfident, that doesn’t mean they are statistically unsound when measured over a full season, or decade. Lopez attempts to measure the model's forecasting ability by reproducing the Lock & Nettleton model over the entire 2016 season, then plotting the predicted win probability against the actual results. And on casual inspection, it looks pretty good! There aren’t many data points, except in the first quarter, where the predicted WP doesn’t match up with the actual WP.

So are we being overdramatic? Are we taking a few mistakes out of context? No, I don’t think so. And here’s a list of why I maintain that the models are seriously flawed: 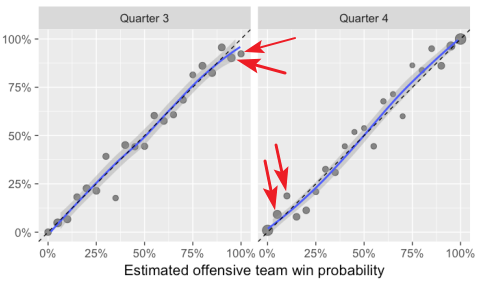 To sum up: for most NFL fans, the only time a WP model is worth talking about is when a team overcomes a huge 95%+ loss probability to ultimately prevail. The model builders might consider extreme situations as "edge cases4," but they are actually the only cases that matter to most observers. And when we inspect the performance of the models at the extremes, we find evidence that they do, in fact, over-estimate the WP of the leading team, especially in the second half. Not just occasionally, but systematically. Further, small errors in a model get amplified at the extreme ends of the curve, so that WP estimates of 98%, 99%, 99.5% may be underestimating the likelihood of a comeback by a factor of 2, 5, even 10. A win probability model that is statistically accurate between 10% and 90% is nice but irrelevant, unless you’re the General Manager of an NFL team or perhaps running a sportsbook.

Additional interesting articles regarding Win Probability, some with quotes from model builders, are at The Ringer, Slate, ESPN and inpredictable.com.

In Part 2, we’ll dive deeper into what some of the flaws are, and potentially, how they can be fixed.